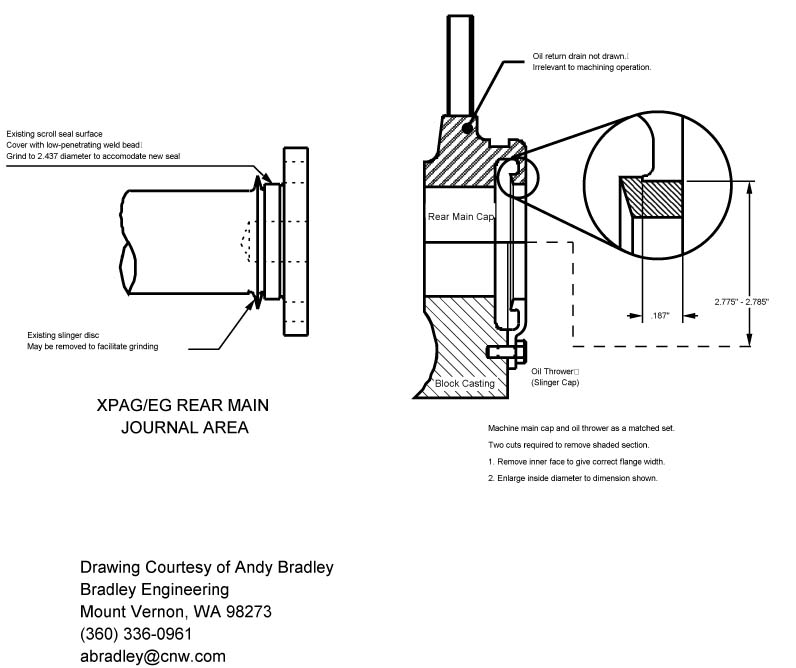 Here are the instruction sheet and drawings for the rear main oil seal modifications that I promised a few weeks ago. The drawings were posted on the website as two files. Here I have shrunk them onto one page and included a text file with a write-up on how to go about having it done.
I know some of you have been fighting leaky scrolls for years, and there have been lots of partial fixes, but I think that this is the only way to go to cure that leak forever.
Hoping for dry parking spaces worldwide...

Here is how to stop your XPAG/EG from leaking at the rear seal. There have been several somewhat successful kits available, but this is the only thing I have seen that works well. It is very simple for any good machine shop to make the required modifications. The whole job can be done for less than $200. USD. You'll also need a gasket kit, and one small-block GM rear oil seal, Fel-Pro #BS40013 or its equivalent, a heavy duty, double-lipped, silicone split seal used on a wide variety of GM engines from the '60s through today. About $8-11. Remove the engine from the car, and disassemble as normal. Haul the block, crank, rear main cap, and the oil thrower cap, with their associated fasteners, down to your machine shop. There are two operations that need to be done. For the crank, lay a small bead of low-pentrating weld over the entire scroll seal surface. Then grind the built-up area down to 2.437" diameter (2-7/16" or 61.90mm) with a micro finish comparable to that of a crank journal . The thrower disc can be removed or left in place, as your machinist desires. That's it for the crank. Assemble the rear main cap and thrower plate to the block. Be sure that the thrower plate locating pins are a good fit. Torque the fasteners to specifications. Mount the block upright on a plain milling machine and dial-in the spindle concentric to the main journal diameter. Using a boring bar, make two cuts to the main cap/thrower area as shown on the drawing. Open the inside diameter to 2.775"-2.785" (70.49-70.74mm). Then take a facing cut to the forward (inside) surface of the seal flange to give a flange width of .187" (4.75mm). The resulting flange will hold the new silicone seal.

Assemble the engine in the normal manner, with the following notes: 1. Do NOT use a paper gasket between the thrower plate and the engine. Use silicone or shellac, to avoid misalignment with the main cap. 2.Use a THIN layer of silicone between the seal halves and the new split flange. Do NOT use any sealant on the mating surface of the seal halves. 3. Use silicone at the joint between the thrower cap and the main cap. 4.Place a thin layer of oil or assembly lube on the crank seal surface to avoid running the seal dry during startup. See the instruction sheet that came with the seal.

Bolt the thrower plate to the block, making sure to seal properly. Mount the top half of the oil seal over the new flange on the thrower cap. Insert the top halves of the main bearings in their respective journals. Lay in the crank, with assembly lube on all the journals and on the seal surface. Mount the other half of the oil seal on the new flange on the rear main cap. Insert the lower bearing halves in the main caps. Apply silicone to the mating surface between the main cap and the thrower cap. Assemble the main caps to the block in the usual manner. If done correctly, the rear oil chamber formed by the block, cap, and oil thrower plate will have all joints silicone sealed. The crank will be sealed with a modern twin-lipped seal capable of living at 9,000 rpm and the only place for the oil to go is back to the sump. 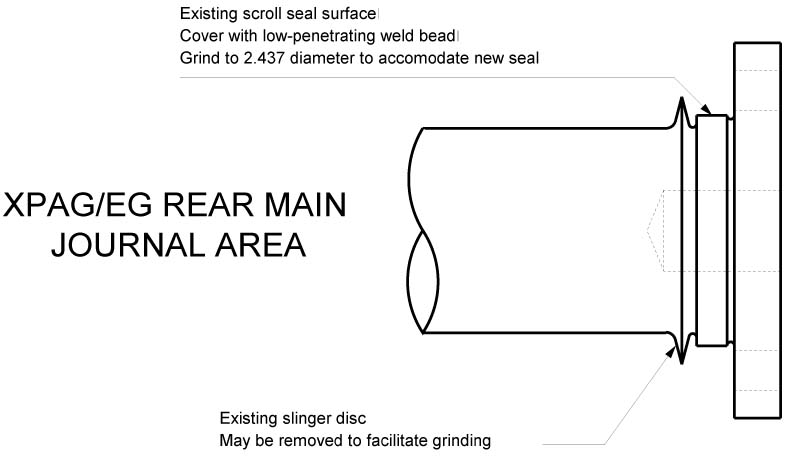 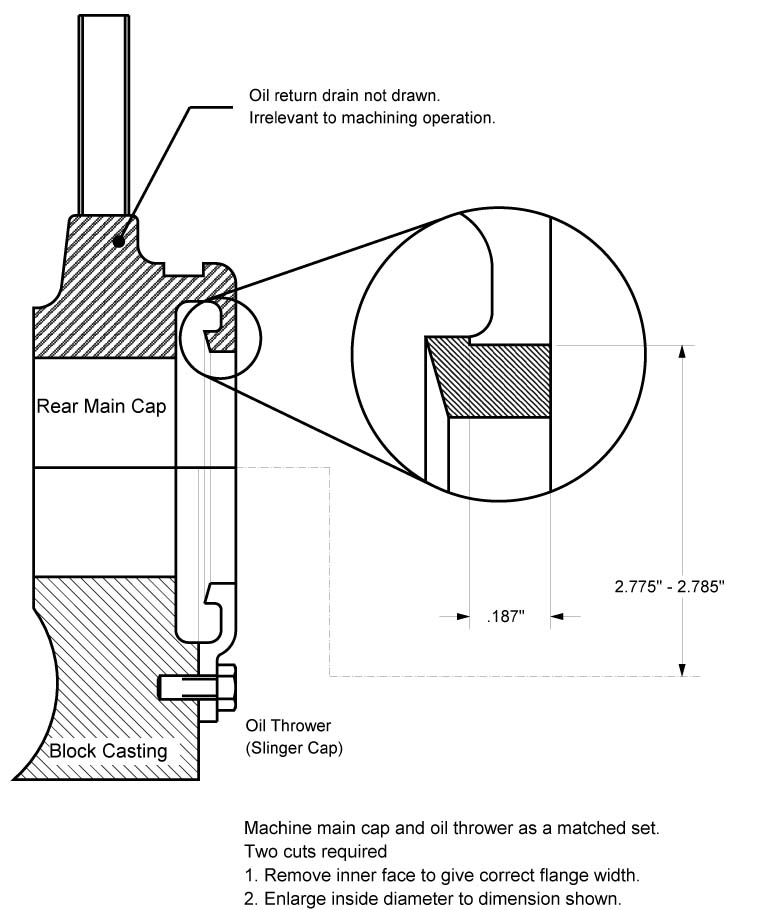